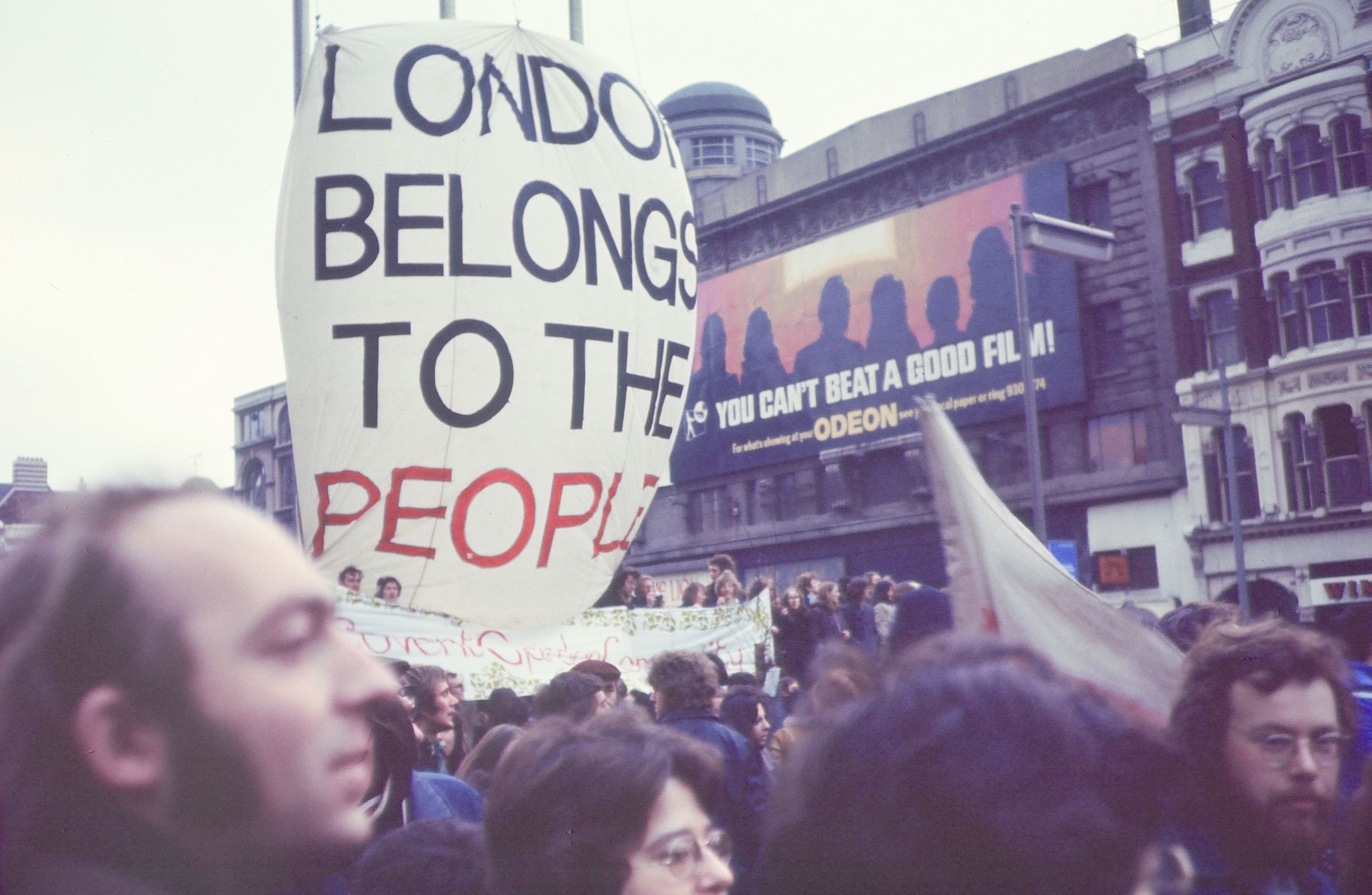 “Land from Singapore at 9.15 am. Take train from Gatwick to Victoria Station. Raining. Bus 52 to Kensington Student Hostel on Kensington Church Street. Tube to Piccadilly Circus and meet a Rees in the loos. Visit C.H.E. (Campaign for Homosexual Equality) office nearby. Meet up with my cousin Jan visiting from Toronto and her friend Louise. With them, see Applause with Lauren Bacall at Her Majesty’s. Irish pub after. Love London!”

That one day encapsulated my life to be in London for the next many years: politics, entertainment, pubs, sex and meeting up with old and new friends. No wonder I loved it.

Where to live and work?

At 23 years of age, I was in London to take up my place at the University of London Institute of Education to do a one year Post-Graduate Certificate in Education (PGCE) to become a certified teacher. Teaching was a career I sort of fell into – but one I ended up loving.

I wouldn’t be starting classes for another month so I had time to settle in. But where to live and work in the meantime? The Canadian High Commission had a binder in their library with job offers and one was for a barman at The Greystoke Pub in Ealing, West London. The job was live-in, so that was a big advantage. Even though I had no bar/server experience, it sounded a good deal so I headed out for the interview, got the job and moved in the next day.

On my first shift, I was introduced to my co-workers and one of them said to me:

“The boss said that he interviewed a Canadian guy yesterday who he thought was probably gay. So I see you got the job.”

This boss, in earshot of this comment, blushed. My reputation apparently preceded me. At least I didn’t have to think about whether to come out or not.

This bar job was not only good for cash and a bed. It was an immediate immersion into the English class system which I’d read about but had never experienced. The pub was divided into three quite separate bars:

People certainly seemed to know where they belonged and I rarely saw people move from one bar to the other.

As an outsider, I learned quickly that the people in each bar had their own way of speaking (Cockney to posh accents), of dressing (working clothes to men in ties and jackets) and their own drink preferences (bitter and lager and gin and tonics).

“Fill ‘er right to the top. I don’t want no head” was a common refrain regarding beer, especially in the Public Bar. They wanted their money’s worth and how to fill a glass right to the brim with those hand pumps was a skill I had to learn.

From our side of the bar, we workers could easily move from one room to the other and at quiet times, we might have to cover all three. We also had to remember three prices for every kind of drink. For example, the same pint of beer cost 20p, 25p or 30p depending in what room you bought it in.

I was certainly glad that the UK had changed to the decimal system for currency two years earlier so I didn’t have to remember that there were 12 pennies to the shilling and 20 shillings to the pound, not to mention deal with half crowns, ten bob notes and thruppences.

Pub hours in those more puritanical days in England were set to minimize the times available to drink. Open for lunch at 11am, they’d close at 3pm and we’d have the rest of the afternoon off until the pubs opened again at 5.30pm. At 10.50pm, there was “Last Call”, stop service at 11pm and then “Drink up, gentlemen” and we had to, by law, have everyone out the door by 11.10pm.

Although these hours were set to limit drinking, what in reality happened was that customers would chug down a quick pint or two in the last 15 minutes or less and then crowds would stagger out the door to walk or drive (!) home or start a fight, depending on their mood.

Compulsory afternoon closing time was abolished in the late 1980s and by the 2000s, pubs could stay open longer meaning that closing times were staggered with less likelihood of these problems.

The head bar person at The Greystoke was a woman who had worked there for many years. She was very strict but had a heart of gold. A kind of a Bet Lynch from Coronation Street type but with a more upmarket accent. All the workers (including several other Canadians – but no other gays) were treated to a roast lunch after the pub closed at 2.30 on Sundays which she presided over and we all loved.

My Sydney boyfriend, Bruce, whom I’ve written about in previous posts, visited me in London during this period and I snuck him into my room for an overnight. The next morning, as she usually did, the landlady opened the door to wake me up, saw Bruce in bed with me, quietly closed the door and left us alone. As I said, heart of gold.

On a visit to London in 2015, I made a nostalgic excursion back to The Greystoke. Not surprisingly, all the walls between the bars had been taken down – and all the pints were the same price at £3+. I searched out a few pub regulars, but I couldn’t reminisce because none of them had been there 42 years earlier as I had!

A flat in Belsize Park

Now that my pub job was over, I needed to find new accommodation. I put this ad into the recently created Gay News newspaper hoping to find a share with other gay liberationists.

Identifying myself as “non-discreet”, I was having a dig at those who wanted to share with someone “discreet”. I didn’t want to be like them.

But before I got any/many answers, I replied to someone else’s ad and ended up in a top floor flat share with three others. A welcoming Franco-Ontarian Canadian woman, Camille, and two gay guys, Peter and Richard, took me in. With only two bedrooms in this tiny flat, I had to share with Richard. That was all we shared, just saying.

Four months later, by February 1974, those three original flatmates had moved out and I became the organizer (landlady?). Some might call it a takeover. I wanted us to live communally, so I arranged shopping trips for shared meals, created a cleaning rota, collected the rent, made sure there were enough coins for the meter and tried not to irritate the others with my organizing ways.

The only phone was a pay phone 3 floors down. Electricity was paid for by inserting a coin in the meter and it took many old shilling and new 5p coins to heat enough water to fill a bathtub and keep the place warm in winter. Many were the times when we’d be sitting having dinner and the lights would go out until we figured out whose turn it was to put another coin in the meter.

Such was life in London for many at the time so it was just normal. My share of the rent was an expensive, to me, £8/week, but that was the going rate, especially because it was in the poshest London neighbourhood I would ever end up living – Primrose Gardens in Belsize Park, not far from Hampstead. I stayed there for 1½ years until May, 1975.

A big plus of this flat was the spectacular view from our window looking over London and it became customary to poke our heads out to take photos of people and rainbows from it, including me blocking the view. You can also see flatmate Amedeo from Italy, effervescent Gus and Mary, guests from Australia and snow.

There certainly was turnover in the flat. Memorable flatmates included Ephraim, a black American student, always joking, and handsome Amadeo, a young, more serious, Italian. Both were in London to explore their sexuality – but weren’t we all?

A longer term flatmate at Primrose Gardens was the tall, kind, patient Henry who, like me, was also a teacher. As he was more experienced, Henry helped me with my lesson plans. In the flat, he was often the peacemaker when arguments arose about, for example, whose turn it was to do the washing up.

Henry loved exploring, as I did, so we frequently went on excursions in and out of London. Henry also introduced me to the big world of opera and got me out to at least a dozen performances at the Royal Opera House, Covent Garden. The only seats we could afford were in what was called the Upper Slips. From that vantage point, we couldn’t see parts of the stage, but that disadvantage was made somewhat less awful because we had a great view of the audience. We could gawk at the smartly dressed audience in the orchestra stalls and Grand Tier in the balcony.

After the performance, we would head to the nearby long-standing gay bar, The Salisbury, on St. Martins Lane, hoping to chat up fellow opera lovers over a pint and maybe more.

Bearded, cultured, smiling and easy to live with Jeffrey, whom I’d also met in Sydney, was another friend who stayed in this flat. How we had reconnected in London pre-email is still a mystery to me! But reconnect we did and Jeffrey would be as anxious to explore as Henry and I were. We often went out together to the theatre, historic sites and art galleries.

As I’d first met Henry and Jeffrey in Sydney through GLF (Gay Liberation Front), we went to GLF events together in London including dances, rallies and meetings. But the bloom had already come off the GLF rose by this time so there were fewer things to get involved in.

Thanks, first, to letter writing and later to Facebook, I’m still friends with both Henry and Jeffrey and we’ve met up several times over the decades. They, like me, are back in their home countries. Hopefully they’ve forgotten my control freak characteristics in that flat.

There is one more flatmate I want to talk about, Garry, with whom I had a complicated and painful relationship for over a year. I was going to include him in this post but the drama of that relationship and what it taught me about myself deserves an entire post of its own – which will appear soon.

But, before Garry, I want to tell you about my experiences as a student at the Institute of Education and later getting a job as a lecturer. I did, after all, have to earn a living. In that post you will also meet Bob, a person with whom I shared my next home, a profession, trade unions and another lifelong friendship.

London had lots to teach me and this was only the beginning.