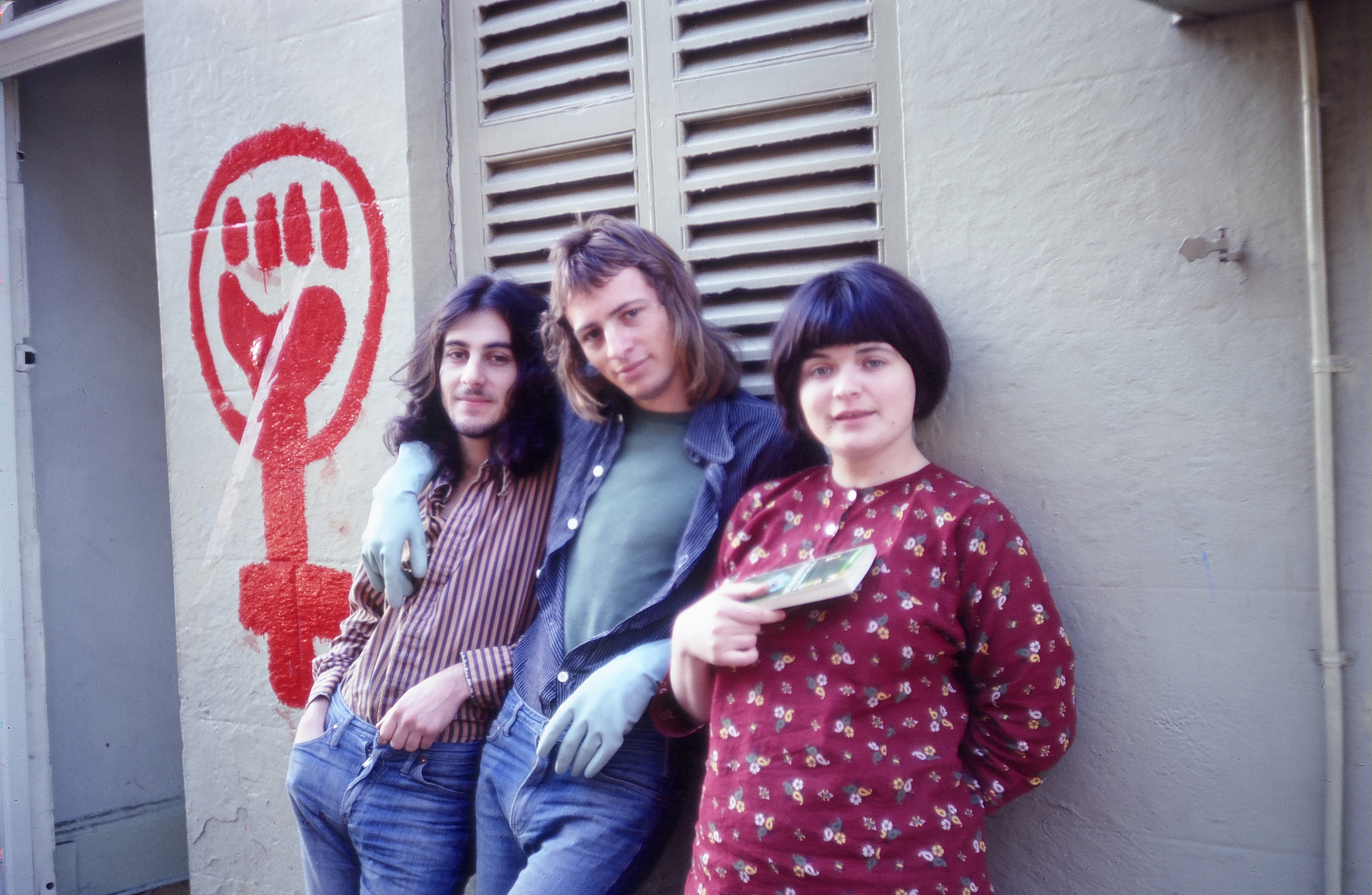 In early 1972, I landed in Sydney from Canada just as Sydney Gay Liberation was taking off and, as you’ve read in previous posts, I, as a young naif, plunged headfirst into their activities and ideas.  This included demonstrating against the media, the church and psychiatry in our fight for liberation.  In this post, I want to say more about what Living the Gay Lib Life was like on a daily basis and how I felt about it.

But first, I’ll talk about some new vocabulary I learned, starting with the word “poofta” (or pouf or poofter) – a derogatory slang word used against us male homos, probably rooted in the French “pouf” or soft cushion.  Of course, as with “queer” now, we would use the derogatory term ourselves to take the sting out of it.

“Camp”, I learned, was a strictly Australian word used by gay men to describe themselves, not as an adjective, but a noun.  “I’m camp”, meaning “I’m gay”.

Another common feature I heard was to feminize pronouns when referring to gay men, usually in a playful manner.  I had been introduced to this usage in Toronto and it was a bit of a shock to be referred to in the feminine – but I learned this way of speaking amongst gay men had a long history.  To illustrate both:

“Look at the wiggle on her.  She must be camp.”

All this to say that it’s not a surprise that the first gay rights activist group set up in 1970 in Australia would call itself C.A.M.P. – the Campaign Against Moral Persecution.  And that its publication would be called CAMP INK (get it?).

Although we in Gay Liberation felt ourselves to be revolutionary and somewhat superior to the reformist C.A.M.P., I did join and I proudly still have my membership card.  You will notice that names were not printed on the cards in case it fell into the wrong hands.

And here are the covers of the issues of CAMP INK that I managed to keep over the decades – all very professionally produced and written.

But C.A.M.P. just wanted reform and tolerance.  We wanted a revolution because reform wasn’t enough.  We knew, as the first lines in our first Sydney Gay Liberation Newsletter said,  “We are oppressed by society and we aren’t going to take it anymore.”   Furthermore,

“To you, our gay sisters and brothers, we say that you are oppressed; we intend to show you examples of the hatred and fear with which straight society relegates us to the position of sub-humans.  We don’t, though, seek just tolerance in this supposedly liberal society.  We see ourselves as participating in the sexual revolution”.

And the way to do that was to Come Out and Come Together, creating and participating in demos, street theatre, zaps, to bring about revolutionary change.  Out of the Closets and Into the Streets, we cried.

We wanted to spread the word, so we produced the Sydney Gay Liberation Newsletter which looked very different from C.A.M.P. Ink.  I even wrote a few articles that I cringe at now but they are of the period.  I may show you those some other time!

Although we were going to change society for the better, we also knew that we could be our own worst enemies.   “For we too have internalized this society’s sexual norms and values which are anti-homosexual” which we later called “internalized homophobia”.  This could lead to self-hatred and, to put it colloquially, lots of nasty bitchiness.

To combat this internalized homophobia, along with our sexism and racism, we participated in consciousness-raising groups (also known as encounter, awareness or sensitivity groups) where we talked (and talked!) to better understand our external and internal oppression.  I loved participating in these hotbeds of fun, passion and power.

“Be honest.”  “Let your defences down.”  “Get in touch with your feelings.”  “Avoid ego trips.”  These were all new concepts to me and I was ready to roll.  I felt stimulated by the flow of new ideas that were streaming into my head.  I began to question my whole life and decided to become the best gay-camp-queer-pouf-GLF homo I could be.

Re-reading these early newsletters and the Gay Liberation Manifesto brings back how important the concept of the personal is political was.  All aspects of our lives were re-examined to find ways to better understand how we could combat this external and internal oppression.

That included how we lived with each other.  Robert, John and Joanne kindly invited me to share their “commune” in a small two story house in very central Darlinghurst.  We shared the household tasks and the stories of our lives.  I learned much more than I offered, such as the importance of a good moisturizer, the intricacies of Art Deco and the meaning of the lyrics of David Bowie’s Ziggy Stardust, not to mention the right way to do the washing up.  And that was only the beginning.

Australia, with its well-known macho culture, also had, surprisingly, a very strong drag queen culture, not only for the gays, but also in working class pubs as entertainment.  I glimpsed this scene when I would go to Capriccio’s on Oxford Street to see the high glamour cabaret acts with 10 – yes, count them, 10 – or more drag queens performing big song and dance numbers as I sat in awe.  This scene, with all its ups and downs, was glorified in the gorgeous road film, The Adventures of Priscilla, Queen of the Desert from the early 90s.

We were unsure whether such conventional drag was sexist or whether it challenged the status quo.  But we did believe it was important to play with gender and use “radical drag”, wearing dresses that Robert and I would buy at the local market.  But my beard stayed on. We were going to break down gender stereotypes.  I was chicken, though, to go out like this on the streets, unlike some much braver conventional drag queens.

My proudest moment was wearing the same dress that Barbra Streisand had worn in “Roller Skate Rag” in Funny Girl.  A theatre guy I picked up had nicked the dress which had come to Sydney to promote the film when it had premiered a few years earlier.  He lent it to me for these photos.  I did return it.  Honest.

Not only was I learning about radical drag, but also about “gay” ways of dressing, using colour, light makeup and scarves, to express our individuality and sense of fashion.  Here are my good friends, John, David, Robert and John heading to the launch of Dennis Altman’s  first major and vitally important book, Homosexual: Oppression and Liberation.  I hadn’t been in town long enough to get an invitation, but I did get some photos!

When I made a trip to Melbourne with some Sydney friends, I met the local girls who clearly also had some fashion ideas.  Below is another slideshow with Melbourne’s famous homos.  I’m in one of the photos looking way too un-fem.  I’m easy to spot.

Next up is how GLF’s ideology influenced my sex and love life.  I wanted to be part of the Sexual Revolution.  Have I got your attention?

One thought on “Living the Gay Liberation Life”