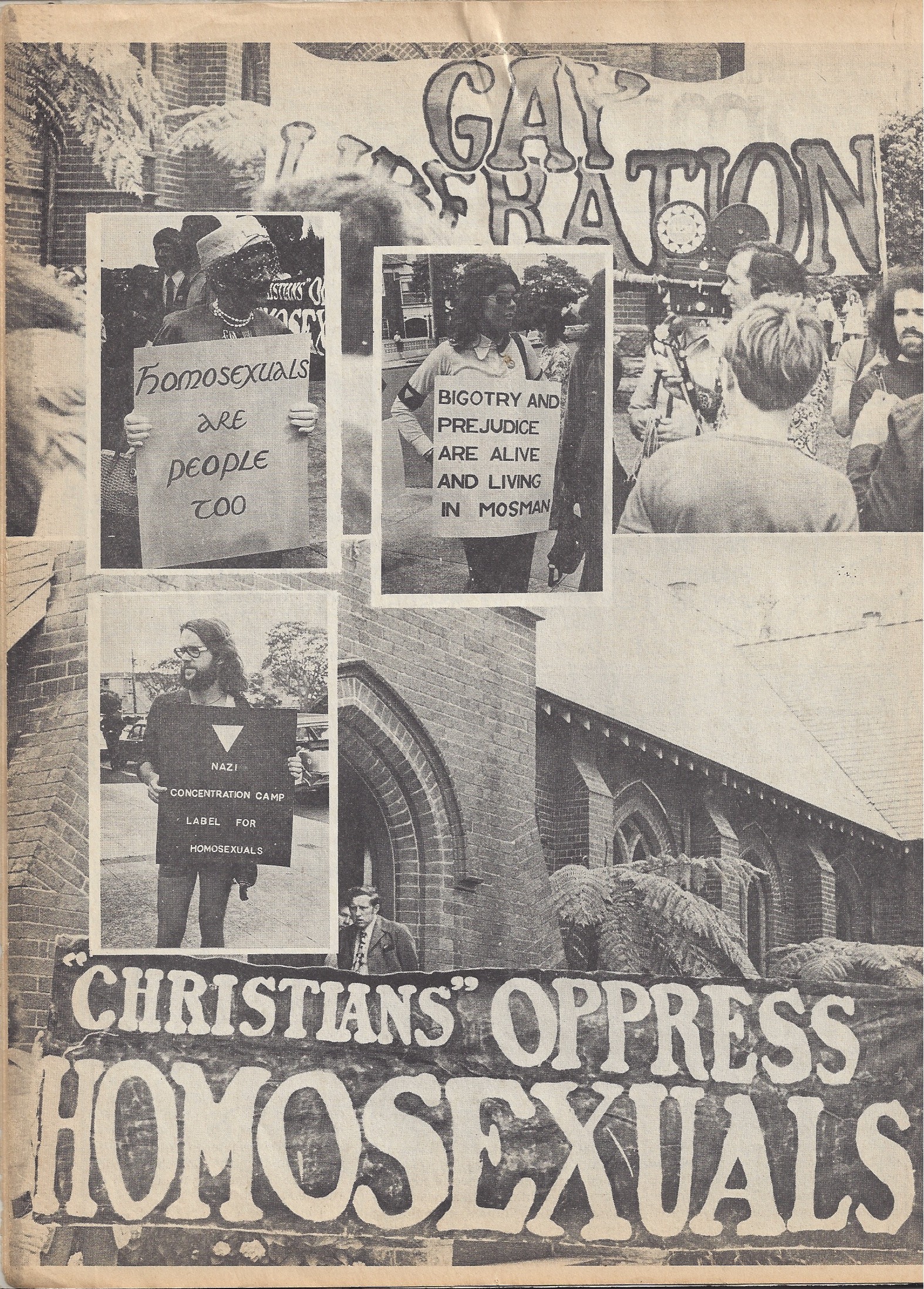 My previous posts described how the burgeoning Sydney Gay Liberation (of which I was a burgeoning member) tackled what we saw as our oppressors – the media and psychiatry.  It’s still 1972 and we lesbians and gays were now ready to take on the third enemy of Gay Liberation – religion.  Or, at least its representative in a quiet suburb of Sydney – St. Clement’s Anglican Church, Mosman.

St. Clement’s Church Secretary, Peter Bonsall-Boone, had appeared on an ABC program called Chequerboard with his partner, Peter de Waal, where they talked quite openly about their relationship – and had Australia’s first TV same-sex kiss.  In the program, Peter Bonsall-Boone had mentioned that he worked at a church, but didn’t name it.  His public coming out and apparent lack of shame on TV was too much for his parishioners and they asked for his resignation. He didn’t give it, so they fired him.

Ironically, the church people had known of Peter’s homosexuality.  So, apparently, it’s ok to be gay as long as you’re ashamed and/or quiet about it.  When this firing became public, there were discussions on TV where the Chair of the Anglican Diocese of Sydney’s Social and Moral Questions Committee went on TV to declare that:

“His [Peter’s] position as Church Secretary was incompatible with his way of life.  The Church exists to aid those who seek help with their problems, but we cannot help those who say they have no problem.  The Church is not down on homosexuality, but we regard it as being against the will of God, like theft or adultery”.

Oh dear.  We had to respond.  So we got up early on a Sunday morning in November to take the ferry across Sydney Harbour to confront the St. Clement’s parishioners as they headed to their 10 am service.  I’m on the left with my longer-than-ever hair and my flatmate, Robert, is on the right.

As a side-point, the poster I’m holding above would have been, I believe, a very early usage of the Nazi pink triangle as a symbol of gay liberation, hence the necessity for an explanation on the poster itself.  It remained a potent symbol of gay and lesbian pride for two decades, until the Pride Flag took over.

The photos below show us disturbing the tranquility of a suburban Sunday morning.  Some demonstrators even went into the church to listen to a sermon on “Freedom” until the hired security men escorted them out after they started asking a few “impertinent” questions.  But we’d made our point and newspapers and TV covered the story.

Peter Bonsall-Boone never did get his job back but he had a long career as an LGBTQ activist, sadly passing away in 2017 just before being inducted as a Member of the Order of Australia “for significant service to the community as a LGBTQI advocate and supporter, and through a range of volunteer roles.”  It was also just before Australia legalized same-sex marriage so he never was able to achieve his dream of marrying Peter, his lover and partner of over 50 years.

The People I Met

One byproduct of being involved with Sydney Gay Liberation and going on demos was that I got to hang out with lots of wonderfully stimulating and intelligent people.  One of them was the author, activist and academic, Dennis Altman.  Here he is below on the left at this demonstration with his partner, Barry Prothero, an art historian.  Beside them is the first paperback edition of Dennis’ landmark book on Gay Liberation – “a penetrating look at the stigma, prejudice and misunderstanding that surround homosexuals, not only in society, but also in literature and philosophy.”

If you look closely at the cover, you’ll see that it’s me holding up the middle of that banner.  Boy, was I proud of that placement!  Cover photo again by John Storey.

While I was writing this post, I discovered that, in 2017, the Australian Broadcasting Corporation (the same one that refused to broadcast an interview with Gay Liberation in early 1972) produced a TV film called “Riot” about the origins of the celebrated big queer Sydney Gay & Lesbian Mardi Gras on its 40th anniversary.

In it, they had a scene where they re-enacted the demonstration at St. Clement’s as an example of an early Gay Liberation intervention.  They used a different church for the re-enactment but I love the fact that a demo I was in 45 years ago is now an historical artefact – like me!  Here’s a screen shot from the trailer.

Did I Ever Have a Real Job?

At this point, you may be wondering whether I was doing anything else in Sydney besides going to demonstrations.  You might be surprised to learn that, between demos, I was a teacher in a Catholic Primary School with the nuns!  That’s for the next post.

One thought on “Sydney Gay Liberation Takes On the Anglican Church”