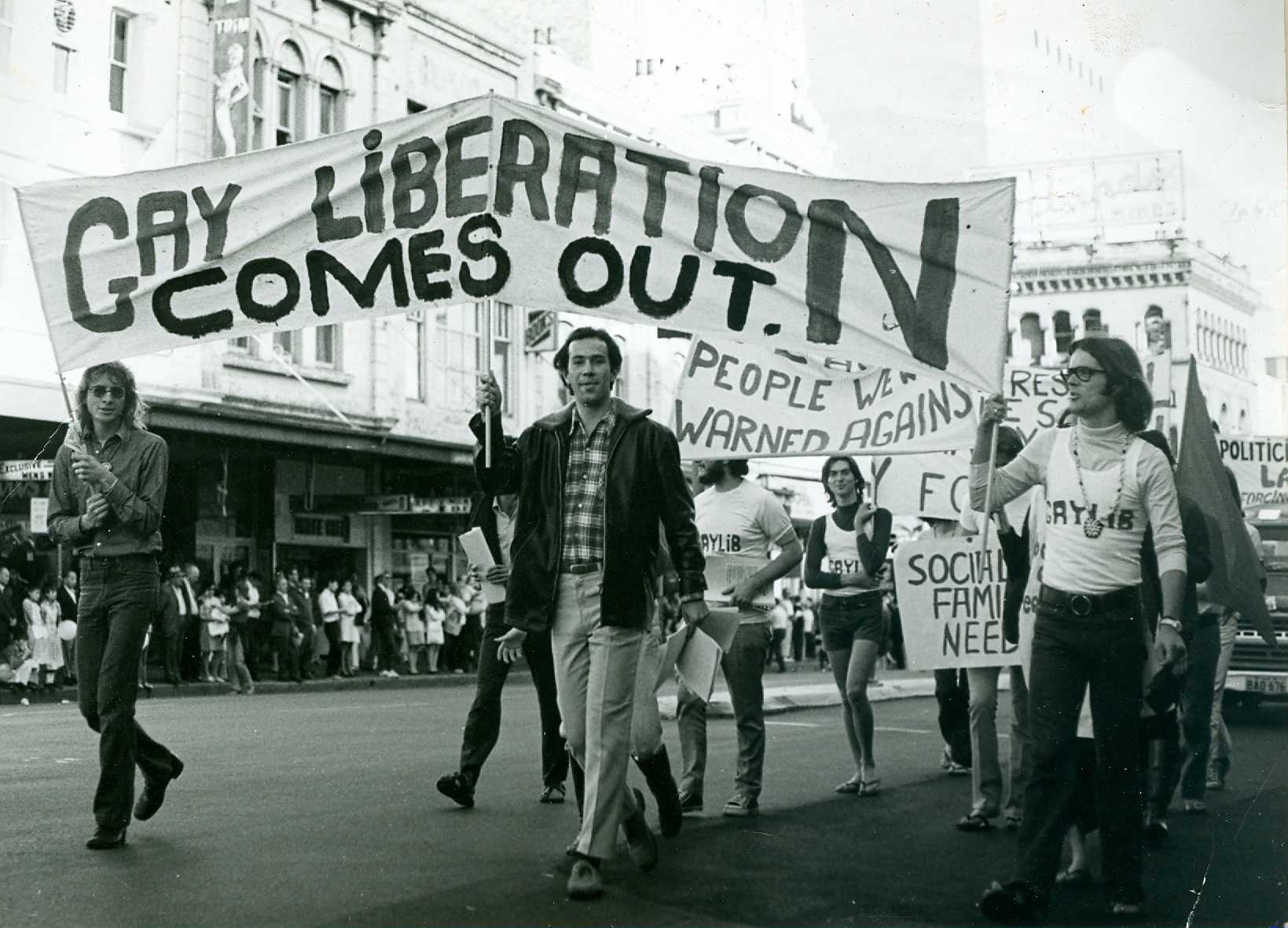 Of course, that’s not literally true, but almost.  My 15 months in Australia from early 1972 certainly bumped me up the gayness scale, thanks to the Sydney Gay Liberation Front and many wonderful friends.

I was ready for it.  As my previous posts explained, at the age of 21, I had a Coming Out Summer in 1971 in Toronto after which I travelled across Canada and down the west coast of the USA to LA.  From there, I went further south through various islands in the Pacific ending up in Sydney in February 1972.

My first view of the famous harbour from the ferry on my way to my guest house in Neutral Bay was breathtaking.    And, as it was mid-summer, clothing was minimal and the beaches were full.  How could I not fall in love with the place?

It wasn’t long until I spotted William & John, the first gay magazine I’d ever seen.  (I’d missed Toronto’s celebrated The Body Politic because its first issue hadn’t come out until a month after I’d left that city.)  W & J bravely covered Sydney’s social and political life from butch men to drag queens.  And it had photos of nude men!   But I only read it for the articles…

In the magazine, I came across this stunning ad.  I later learned that it had been drawn by David McDiarmid, who became a famous and fabulous artist and a friend.

Needless to say, I very quickly headed over to the GayLib Centre on Glebe Point Road and my life changed.

Why?  Because the Gay Liberation Movement at that time was flourishing, vibrant and full of optimism.  And so was I.  We were ready for each other.  As a “new gay”, I wanted to be immersed in a milieu that provided me with friends, radical new thinking — and sex.  Being far away from home made it easier as well.  No family or high school friend was going  to see me on a demonstration or holding hands with another man on the street.

The Gay Liberation Front (GLF) joined Black, Women’s and other National Liberation Fronts in opposing “The Establishment”.  Ours was born of the Stonewall Riots in NYC in the summer of 1969 and was spreading from there to the UK, Australia and Canada and other Western countries.  My timing was perfect, joining Sydney’s GLF right near its beginning, while it was still full of that optimism and vibrancy.

I hadn’t always been so open to change.  Through most of my youth, I had been apolitical and I looked and acted very straight.  Here’s my high school graduation photo to prove it.  Looking the part, I had applied to study business at Queen’s University in Kingston.

But after one miserable year in the Commerce program, I transferred out to Arts where I felt much more at home.  My Sociology and Political Science classes forced me to question myself and the world I lived in.  I began to read the required countercultural authors of the time:  Herman Hesse, Jerry Rubin, Abbie Hoffman, Jack Kerouac and Theodore Roszak to name a few.  Times they were a-changin’ for me.

In the summer of 1969, I had had the chance to get a lift with friends to not-too-far-away Woodstock, NY for some music festival they raved about.  I turned it down as too expensive and lost the chance to be part of the most celebrated music festival of the era.  But, being a very prissy young man, I might have not liked all that mud.  I could have, though, dined out on that story for the rest of my life.

My first anti-Vietnam demonstration was in Washington, DC in April 1971 but I was only there accidentally as my family was driving through on the way home from a holiday in Virginia and I snuck away to the demo.  The sight of thousands of demonstrators, though, profoundly impacted me and I wanted to be part of it.

By the early 70’s, therefore, I was finally becoming a Sixties Hippie (I have always been slightly behind the times…!), wearing my hair long as a political statement.

Out of the Closet, Into the Streets

Back to Glebe Point Road and my first GLF meeting.  The room was so packed there was hardly enough space for everyone.  Ideas bounced around the room about how we were oppressed by “society”, about how we shouldn’t objectify each other, about where we should do our next “zap”, about the importance of coming out, about the latest drag show at Capriccios and more.  My head was spinning and before I knew it I was on an organizing committee for demonstrations.

Over the next few months, our demonstrations covered the whole gambit of what we were against:  psychiatry, the media and the church.

Gays and the Unions

But our first move was to get permission to join Sydney’s annual May Day Parade organized by the unions.  The initial “no” to our request (“what’s gay got to do with unions?”), after pressure, turned into a “yes”, although we were relegated to the back of the parade.

We spent the day before the march quickly painting the banners.  “We Are All May Queens”, “We Are The People We Were Warned About”, “Gay Liberation Comes Out”, amongst others.

My friend, the photographer John Storey, caught me in this photo on the right holding the banner.  (You have to believe me that turtlenecks worn under singlets/vests/tank tops were very fashionable at the time!)

Here are more photos from that demonstration that I took.  We were so buzzed.

Our next demonstrations were responses to events that were happening that year (1972) in the media, psychiatry and the church.   I’ll look at those in the next post.

4 thoughts on “Australia Made Me Very Gay”