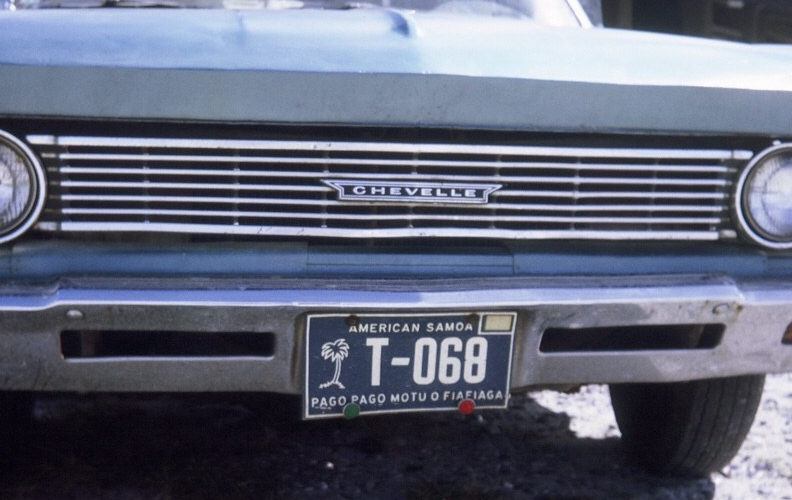 After leaving Hawaii, the next stage of my 1972 “discover myself” backpacking adventure was to American Samoa.  This was my first contact with what we then called “The Third World”.  Despite being a territory of the USA, it seemed very poor to me, given my suburban eyes, but it was gorgeous with high mountains, lush tropical forests and beautiful beaches.  I was able to find a $5/night motel — Herb & Sia’s — which, by the way, seems to have continued to exist up until recently.

The only high-end hotel on the island was the fancy Intercontinental Hotel which, I noted, charged the outrageous sum of $25/night.  But it was here where I had my first experience of what we now call “white privilege”.

I could use their pool and other facilities because I could get away with pretending I was a guest of the hotel.   A few of us backpackers learned that trick which the local Samoans couldn’t get away with.  Our privilege paid off for us, even though I had the sense that this wasn’t right.  But it didn’t stop me from taking advantage of it.

Having been introduced to Margaret Mead’s “Coming of Age in Samoa” a few years earlier in my Sociology classes back at Queen’s University, I was on the lookout for the more peaceful and happy people with a relaxed attitude to sexuality which Mead had compared to the uptight neurotic sexuality of American adolescents.  This was long before her findings had been strongly criticized — and defended.

I had also read of the Fa’afafine people in Samoa who identify as third gender, similar to the berdache/two-spirited people of the indigenous culture in North America.  I’d hoped to meet some but that wasn’t to be — so no gay adventures to report!  Instead I toured the island with straight tourists and here are a few photos I snapped.

A short flight took me to my next stop — then called Western Samoa — now just Samoa.  For the first time on this trip, I heard a new language, Samoan, and experienced a new currency, the tālā.   I immediately sensed that this country had more connections to Europe than America, probably as a result of it having been subjected to German and British  imperialism.  In addition, it had gained its independence from New Zealand just 10 years earlier.

I stayed at The Casino Hotel — a cheaper competitor to the better known Aggie Grey’s Hotel nearby.

At the communal meals, I met fellow travellers from New Zealand and Sweden and headed out to explore starting with the capital, Apia, and Robert Louis Stevenson’s home — a local landmark.

Although I loved exchanging stories with other travellers and getting tips, I was very jealous that the Swedish couple I’d met, Vivian and Tom, were also going to see Samoa’s less populous island, Savai’i — and I wasn’t.  I wanted to see as many South Pacific islands as I could on this trip and I didn’t like meeting people who were collecting more islands than me.  This is called backpacker oneupmanship.

Another competitive element was comparing how much we’d spent on various foods or services always feeling a sense of victory when I’d got a cheaper deal than others who we claimed had been “ripped off”.  But then I began to realize that the differences in prices we were talking about were minimal and the only people we were hurting were the locals who were just trying to make a living.

As a side note, you might be interested to know that, in 2009, Samoa switched from driving on the right, as is done in American Samoa, to driving on the left!  Certainly no easy task.  The country wanted to better orient itself to its trading partners like New Zealand that also drove on the left.  In 2011, it went even further by deciding to go from being the last time zone in the world to being the first, again because of its South Pacific neighbours.  By moving to the other side of the International Date Line, it “lost” an entire 24 hours but became the first country in the world to see each new day’s sunrise.

I had tried to squeeze Tahiti into my open air ticket, but it didn’t fit.  So, Kevin, from my hotel in Samoa, and I flew across the International Date Line to Fiji.  We also “lost” a day that I never recovered.   Its international airport is in Nadi, almost 200 km away from the capital, Suva, which we wanted to head to.  So onto a bus we went and drove clockwise around the almost circular island.  On our way, we stopped in several towns including a harbour where some of my fellow passengers got off to board this boat to an offshore island.

The first thing that struck me about Fiji was that it had a very visible South Asian population — something I hadn’t seen before — including the resulting temples and mosques.   This was the result of the arrival of over 60,000 indentured labourers from India up until, I now read, 1916, to work on the sugar cane plantations.  Most were Hindu and Sikh with some Muslims.  They now make up about 40% of Fiji’s population.

Of course, Fiji was also very British with a cricket ground, children in school uniforms and zebra crossings – and poms.

Fiji was where I first learned the term “pommie” or “pom” to describe people from England.  Our Seaview Guest House had two pommie lads visiting who were friendly, but they were a bit too laddie for me.  They did, though, take a photo of me (resplendent with my hippie headband and increasingly longer hair) before I left Suva.  Kevin and I took the bus and continued clockwise around the island back to the airport at Nadi to take off for his home and for my next adventure — New Zealand.

Have you backpacked your way to new adventures?  Do you have similar stories of backpacker competitiveness and cooperation?