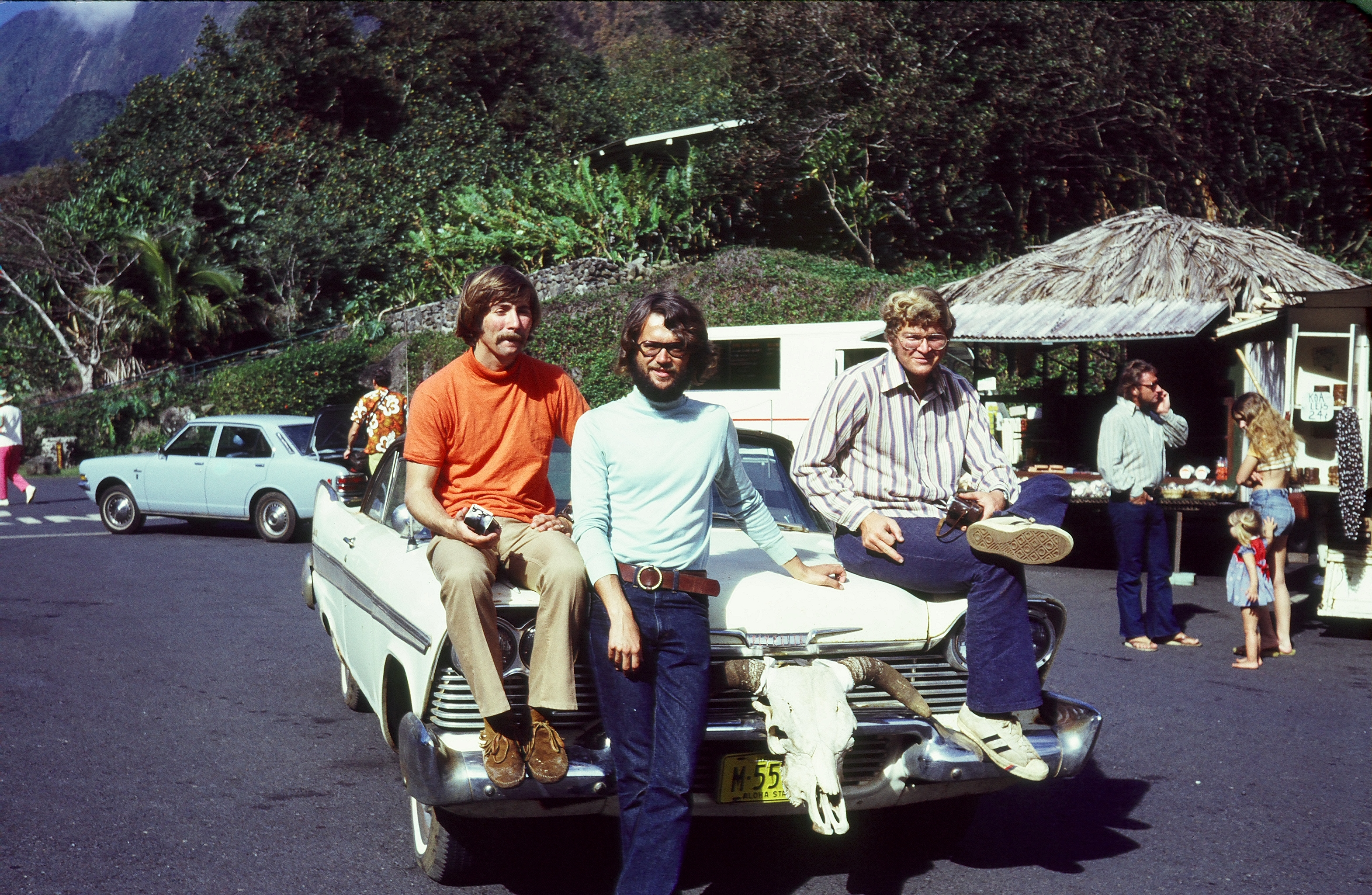 If you’ve been reading my posts, you’ll know that I’ve just finished telling my “My Coming Out Summer of 1971” Story.  I was a 21 year old naif who found my way into the gay world in Toronto.  That was followed by my backpacking adventures across Canada and down the West Coast exploring my sexuality and having adventures along the way —  including falling in love with Frank in Seattle.

But now I’m moving on, heading to Australia through the South Pacific using my “as-many-stopovers-as-you-like” plane ticket from Los Angeles to Sydney.

The Big Island of Hawaii

The Departures Lounge at the Los Angeles Airport gave us cocktails and leis as we waited to board our Pan Am plane to Hilo on the Big Island of Hawaii in December 1971.  Because I snootily considered myself a backpacker and not just one of those regular tourists, I refused the leis, but I did take a cocktail.

This was my first ever visit to a tropical island and, having only seen the ocean once before (Long Island, New York), it was all new to me.   As I was backpacking, I had a sleeping bag with me, but, for the first night in Hilo I decided to stay in a cheap hotel.  After that, I  headed to the Black Sands Beach for the first of several rough camping nights around the island stopping wherever I could find a private spot.

I didn’t keep a diary during this trip but I dutifully wrote notes on the slides that I took which, miraculously, I still have, almost 50 years later.  Aren’t you impressed?!  They filled in the gaps in my memory.  The dates and numbers printed on the slides helped enormously too.

Most of the captions on the photos that follow are directly from the notes I made on the slides.

My slide notes tell me that, although the area was deserted in this early December 1971, I was able to hitch rides around the island.   I climbed the volcanic mountain, Mauna Kea, looking down onto live lava, saw the monument to Captain Cook, descended into the Waipo Valley, viewed roads closed because of lava spills, photographed sunsets and camped at the Samuel Spencer Beach Park.

Some of the beaches have black sand created by the lava exploding when it reaches the oceans and cools very rapidly. I’d never seen black sand — nor lava.

I do remember being absolutely thrilled at being on this adventure on my own and finding my way in this new, beautiful, unfamiliar place.   I know I must have been on my own because there are no photos of me in these days long before selfies!  And no people, either.  Just this gorgeous scenery.

The Island of Maui

The island of Maui was my next stop westwards where there were more people.  I met up with a Bruce and a Dick and the three of us wanderers rented a car to tour the island.  They actually weren’t gay, if I remember correctly.  I’m very open-minded.

We stayed at The Pioneer Hotel in Lahina, its main town, for three days over Christmas – the first one ever away from my family – and in heat.  I did feel homesick, so I managed to find a pay phone on the beach and used many coins to call home in Toronto for a few minutes to say hi and Merry Christmas.

The Island of Oahu

After a brief stay on the island of Molokai, I headed to the most populous island in Hawaii, Oahu.  Back to crowds, sightseeing and the gays.  I found Richard, Ronald and Claude, some local gays, who looked after me and showed me the sights.  That included a visit to Queen’s Beach in Waikiki – a gay beach and my first one.  I was so excited chatting there with other gay tourists, backpackers like me and locals.   Since then, I’ve made a point of finding gay beaches wherever they exist!

In Honolulu, I did have my first experience of having sex with an older (i.e. 40-ish!) man.  I was delighted to be treated to dinner by him and introduced to his friends.  I also got a nice hotel to stay in for a change instead of a sleeping bag on the beach.  I didn’t get a photo of him, though.

Correction:  I recently found this snapshot of my “older man” and me on this gay beach.  He’s the guy on the right with his back to me!   Looking more carefully at this photo, I might have set my camera up on the ground and used my timer to get a “selfie”.   Or was I trying to take a photo of him without him noticing!?

My much more romantic encounter in Honolulu was with Barry, who had served in the Navy in Vietnam — my first meeting with a vet from that still on-going war.   My romantic feelings came not only from the fact that he was hot, but also because we watched the New Year’s Eve fireworks from his apartment overlooking Waikiki while making out.  Together we welcomed in 1972 and I never forgot that.

But, shortly after, we said goodbye at the airport where he came to see me off as I left Hawaii for my next stop – American Samoa.