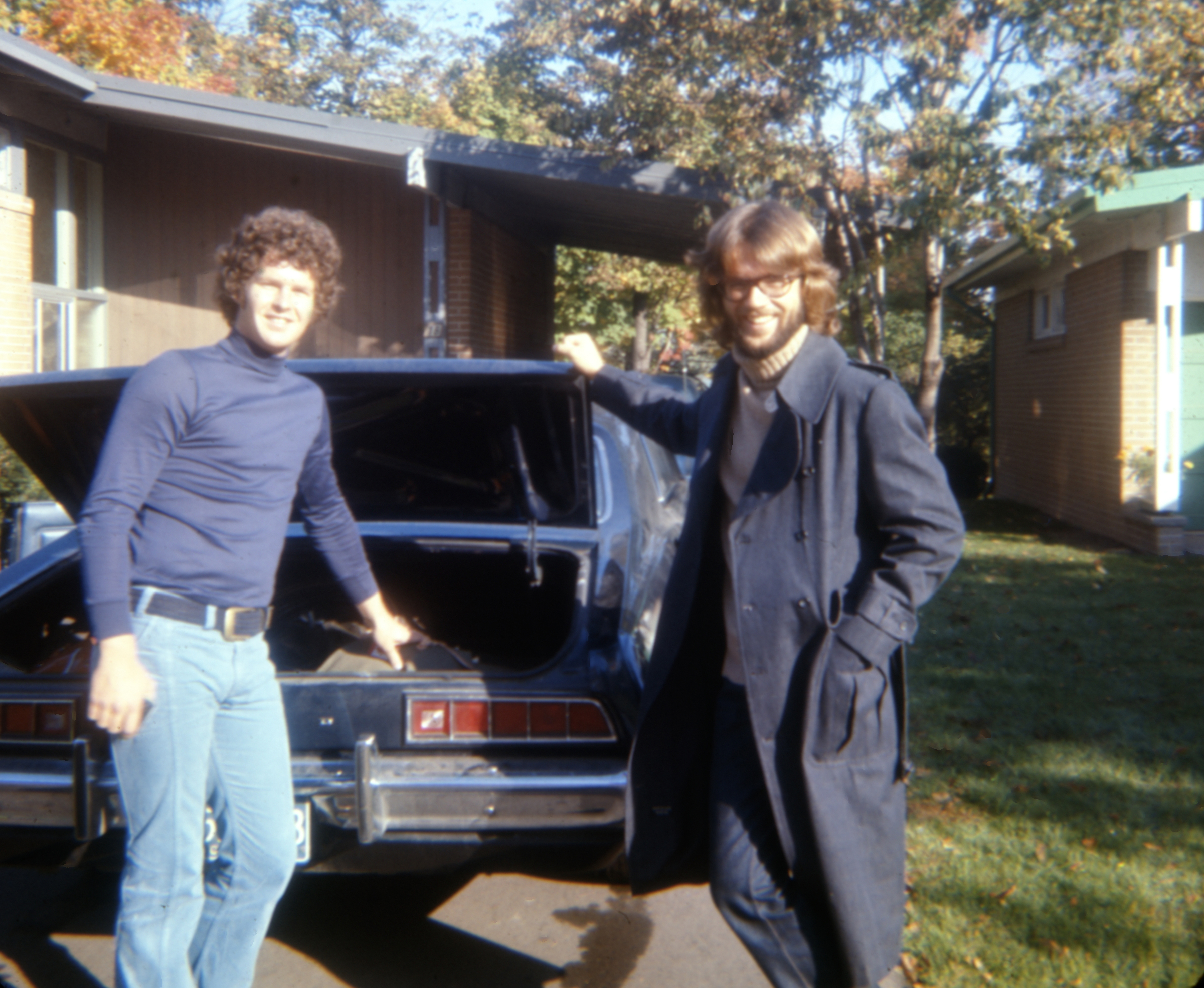 My experiences during my Coming Out Summer of 1971 had been so intense and life changing that I decided not to return to do my 4th year (the Honours year) at Queen’s University. I wanted more adventures. So I decided to take what we would now call a “Gap Year” to explore the world and my newfound sexuality. Four months later, I’d crossed North America and the Pacific and ending up living in Australia.

That adventure started on October 20, 1971 in Toronto. At the age of 21, I said goodbye to my mom and she took this photo of us as we were about to leave. With a combination of fear and excitement, I got into the car with (straight, but cool) Dave, a fellow worker and Gap Year-er from Ontario Place.  The Trans-Canada Highway took us across the country to Vancouver in about 4 days.  There we stayed with other Ontario Place refugees in an apartment in the city’s West End.

Drinking in the new atmosphere, I headed to the gay bars right away which were packed. It didn’t take me long to meet Bob who swept me away to his home in Comox on Vancouver Island for a few days, allowing me to combine a tryst with a travel adventure: a combination I would never tire of.

In Love with Frank from Seattle

But it was meeting Frank that turned out to be the big adventure.  We became each other’s first boyfriends.  Frank was up from Seattle for the weekend with a friend of his and we crossed paths at a bar.

He returned to Seattle and, a few days later, I joined him there after saying goodbye to my friends and heading out on my own. Frank and I were both “new gays” ripe for falling into each other’s arms and into love. He was a student at the University of Washington and we hung out together for two weeks on campus and around town. He taught me much about Seattle, his hometown of Choteau, Montana and his tight knit  family. It felt idyllic.

Despite that intensity, I did leave town and Frank after those two weeks. After all, I was on a journey and I wanted to keep moving. But how could I justify calling Frank a boyfriend if we only hung out for two weeks? It was because I left with both of us intending to end up living together in Australia.

I’ll write more about Frank later, but I can say now that he never did come to Australia. We did, though, stay in touch for years and saw each other a few times.  He died, unfortunately, of leukemia in 1998.  The fact that he sticks in my mind so strongly almost 50 years later says something about the impact he and that first relationship had on me.

In the meantime, we did write long love letters to each other during my travels using the “poste restante” service of American Express – one of the perks of using their Travellers’ Cheques. Their offices kept letters sent to you until you came to pick them up.  And I still have Frank’s letters — all 40 of them.  I’m reading them again and they’re touching me immensely, bringing up many memories.

San Francisco and the long gone Summer of Love

But take off, I did. On the Rideshare bulletin board on the U of W campus in Seattle, I met up with a kind driver. I remember a bit of Portland and the California Redwoods as we headed south to San Francisco. Little sticks in my mind, surprisingly, of what I got up to in SF except for getting to the infamous Haight-Ashbury area to see the hippies.

I was, as usual, a bit late on trends but I felt that I now had some connection with the hippies as I had let my hair grow longer, experimented with “free love”, smoked pot, read Abby Hoffman, Tom Wolfe and Jerry Rubin amongst many others, studied Sociology and smoked pot. But I was a bit late as The Summer of Love people were fading away and I couldn’t identify with what I felt were a “harder” breed.

My kind was in the Castro (gay) area of town. There, I hooked up with a guy I met in a bar who let me stay with him at his home. I often came to depend on the kindness of strangers on this trip of mine.

On to Los Angeles

My drive down the Pacific Coast Highway to Los Angeles, as anyone who has done it knows, was spectacular. In LA, I headed to the Gay Centre of Los Angeles (as it was known at the time) and found out that they provide accommodation for stray gay kids who end up in LA. A kind gentleman there interviewed me and offered me a mattress in an attic in a house they had. There were about 4 of us on those mattresses sharing our stories and lives.

I guess the Centre saw me as homeless which is a bit unfair of me to take up a space when I had the money to stay in a hostel.  But it was a wonderfully unique experience for me.

Reading about the Centre now here, I see that it was founded in 1969 and was the first LGBT centre in the world. I’m happy and lucky to have been an early recipient of their care.

Frank wrote a letter to me addressed to 1322 N. Van Ness Avenue in Hollywood which I assume would have been the Gay Centre. When I check out that address on Google Maps, there’s only a big sports field to be seen, so I guess that home and its attic are long gone.

Besides the Gay Centre, I have little memory of what I did in LA, but I do remember I drove with some guys down to the border to visit Tijuana for the day.  The guard took one look at me and said my hair was too long and he refused us entry into Mexico.  I guess they were worried about hippies bringing drugs  into Mexico?!  I wonder if they ever considered putting up a wall…  So our day trip was spoiled by my long hair – and I wasn’t even a proper hippie!

Heading into the Pacific

I could afford this low-cost trip not only because of my savings from my summer job but also because my paternal grandmother had died the previous year and left me $1000 in her will. That was a lot of money in those days.

In fact, all the money I used for my 4 months of travelling I carried around in travellers’ cheques.  They were safe, but you always had to line up at banks or American Express offices to cash them and fees could be exorbitant.  I don’t need to tell you that using plastic these days is a much easier option.

That money from Nana allowed me to buy an “open” Pan Am airline ticket to fly across the Pacific from Los Angeles to Sydney. That meant I could have as many stopovers as I wanted at no extra cost as long as I continued in a westerly direction and I didn’t go over the mileage maximum. I loved the idea of that and used every mile.  Here was my itinerary:

I’m very grateful, Nana, for your generosity allowing me to have those adventures.  You’ll find out about that trip in the next post.

Did anyone ever leave you money that enabled you to change your life in some way?