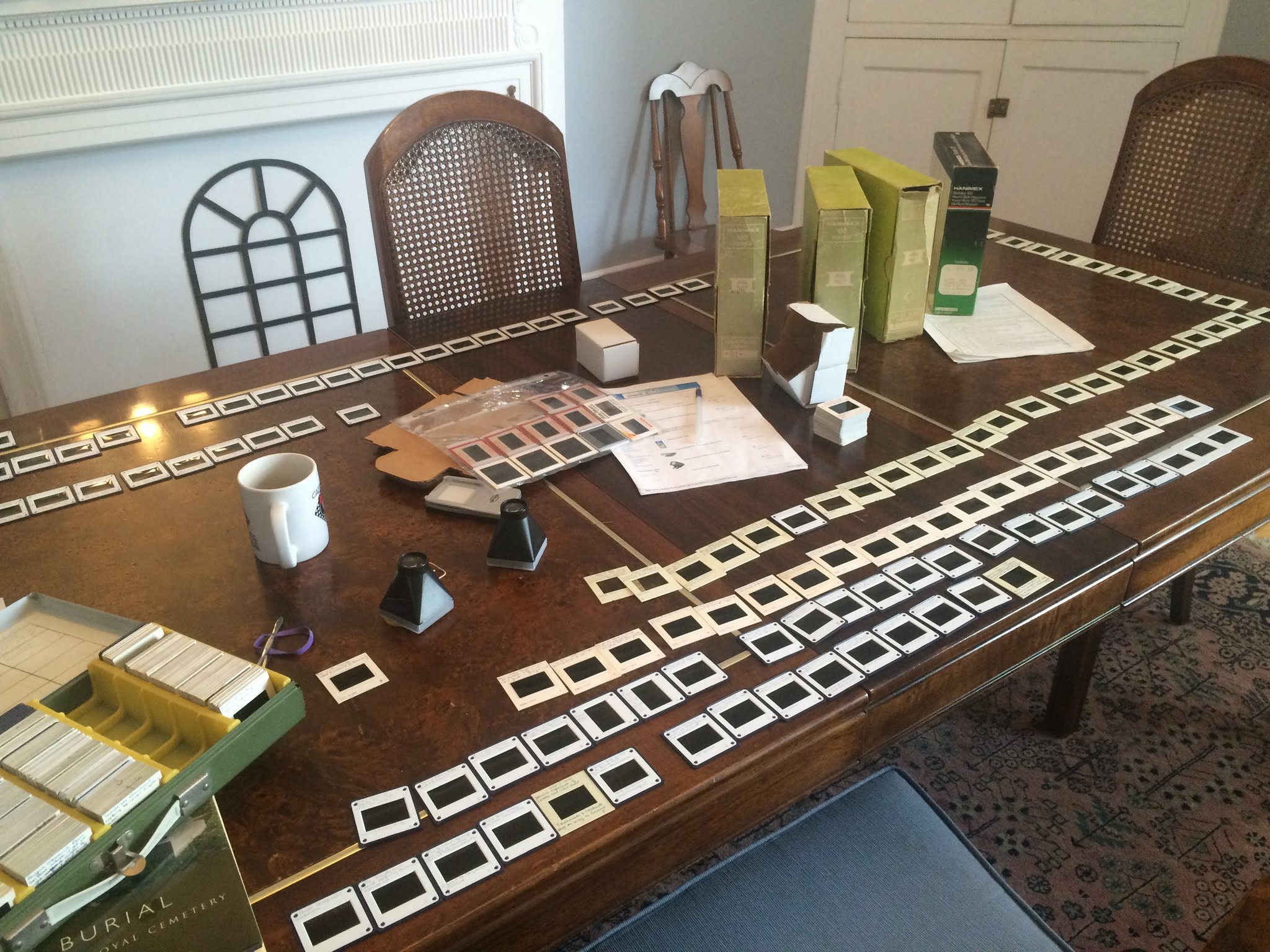 How did I manage to keep, store and show all the thousands of photos that I took over the past 50+ years that I now want to preserve digitally through this website?  I did it through a combination of my OCD-ness and my desire/need to have a record of my experiences —  something I inherited from my father.  We both believed that, in some way, the experience wasn’t valuable unless it was recorded.

During the ’60s (my teenage years), I collected the few photo prints I had in unorganized envelopes.  When my parents gave me my first photo album in 1969, I started storing the photos there. You’ll see that this album was made specifically for the square photos of the time — no other type would fit. You’ll also notice that I made notes describing the photos, a habit I continue to keep — which certainly helped with remembering the when and the where of them.

From Photographs to Slides

In the early ’70s, I switched to taking slides because they had became cheaper than printed photos — and they were better quality.   I organized my slides into those ubiquitous slide trays.  In 1973, Garry, my boyfriend of the time, very generously bought me a slide projector for which I have been eternally grateful.  In fact, I still have it!

I’m not sure my friends were so grateful as it wasn’t beyond me to pull out my slide projector at any point in time to have a slideshow of photos from whatever my last trip had been.  I was teased about it terribly.  Justifiably so.

I took slides from 1967 until 1987 resulting in thousands of them housed in dozens of trays and carousels during those 20 years. I would write a date and the scene on most slides and, on top of that, I would summarize the contents on the back of the case of each slide tray. I told you I was OCD.

These trays took up a lot of space so my husband, David, put his foot down last year and told me to get rid of them. Therefore, I started looking through those thousands of slides and digitized what I felt were the “good” ones. Generally, those were the ones with people in them – and me! I wasn’t concerned with preserving shots of scenery.

Here I am sorting them out, eliminating the trays and digitizing the slides. Going through them all brought up many memories for me and was partially the impetus for me to create this website.

I then put all the slides into much more manageable (and space-saving) binders and threw away the trays.

Here are the old trays going into our local Eco-centre.  I went through a period of grieving saying goodbye to these items that had hung by my side through the decades.

When I went from slides back to photo prints in 1987 (again because that became the cheaper option), I also went back to albums. From 1987 to 1992, I filled 27 (!) albums with my photos, again all thoroughly annotated.   I have to say that even I’m surprised that I still have them, given that most of that time I was living in England and had to transport them all back to Canada with me.

In 1992, I got lazy. The prints started to stay in the envelopes and not get into albums. By the time I went digital in 2000, I had hundreds of unsorted photos in those envelopes.   Recently, though, because I had retired, I had more time to go through them. But, perhaps to your surprise, I did NOT start putting them into albums. I did, though, organize them approximately chronologically (through memory) and put them in the three colourful and purpose-built boxes you can see above.

For some reason, I’m not as motivated to go through and decide which ones to scan, as I was with my slides. Maybe they’re not “old enough” to warrant that attention.   We’ll see what happens in the future. I have enough of my faraway past to deal with as it is at the moment.

Because digital photos are so easy to take and the space needed to save them (whether it’s in the cloud or on a hard drive) is getting cheaper and cheaper, no one has any hesitation in taking as many photos as they want. But what do you do with them? My obsessiveness with slides and photos continues with the digital version — I have all 70,000+ organized by subject and year. Crazy or what?

And I’m even finally adapting to Google Photos with all its tricks and treats, although I am somewhat suspicious of large corporations who can chop and change their methods and systems at any point leaving you having to constantly adapt to their new processes and procedures.  So I still have a hard drive with all my photos on it – suitably backed-up, in case you were worried.

That’s my story regarding my voyage through capturing images and storing them. I consider myself lucky enough to have lived through so many technologically dramatic changes in photography over the decades and having been able to take advantage of them.

Have any of you felt the same way about taking photos — that if you didn’t capture the moment, it lessened its importance?  What has your journey through photographic technology been like? Do you feel “trapped” by the photo cloud service you use now? Can those of you who took photos before the digital days remember how you stored and showed your photos?

6 thoughts on “My Voyage Through Storing, Showing and Archiving My Photos”