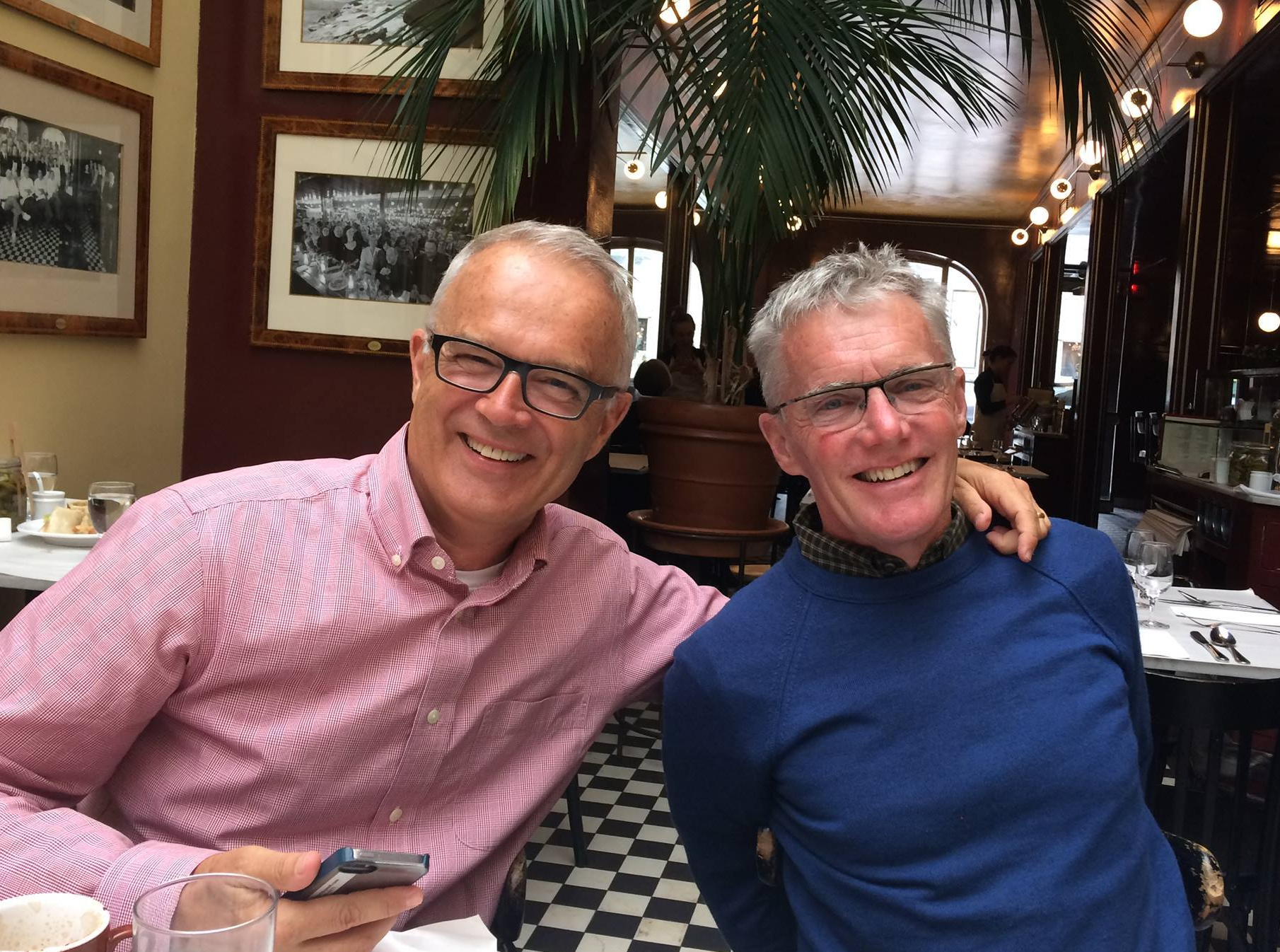 Here we go.  My first post.  I’m Gregg, the one in the pink shirt on the left above with my husband, David on the right.  What am I doing here?  I’m a bit late to the website game.  What pushed me over the edge is that I recently hit my 68th birthday.  My aging has led me to think about what will happen to my history after I’ve shuffled off this mortal coil.

What history am I talking about and why do I – or you – care?   Over the years, I have collected and, somewhat to my surprise, carried around with me (through the eight cities and four countries I’ve lived in) very large numbers of slides, photos/snapshots, films, letters, diaries, address books, postcards and other ephemera.  Before they get thrown in the dumpster after I’m gone, I’d like to do something to preserve some of them. At least digitally.

Why? I guess because I believe they have some interest as a history of the life of a baby-boomer WASP gay/queer Canadian/British cisgendered able-bodied man who’s lived though through decades of monumental change.  And since I hauled the damn things around with me for so long, I can’t just let them go!

Over the last few years, I began to organize and digitize my archives and it brought back surprising memories and a full range of feelings.

Therefore, the purpose of my website will be to post these digitized archives along with some of the memories, feelings and stories that go with them.  I don’t believe in heaven and everlasting life, but I do believe that eternal life may exist on the Internet.  Getting my little bits and bytes onto the Internet might be my way of having that everlasting life!

So, it’s a vanity project!?  I hope it might be more than that as I believe that some of my stories will have relevance for others.  As well, I want to pay tribute to my friends, family and lovers with my stories.  I have been blessed with much happiness in my life mainly due to the support and love I’ve had from these important people.  I feel lucky to have lived the privileged life I’ve led and I’m passionate to share it.

To be honest, I’m not sure who my audience will be or even if there will be one.  Those interested in other people’s memoirs?  Or in old photographs and films?  Or LGBTQ archives?   At first, I assume my audience will be friends and family who will politely read it – and even maybe continue to do so if it grabs their attention.

Beyond people I personally know, my audience could be younger gay/queer men who want to know what gay life was like back decades before they were born, even before AIDS raised its ugly head in the 1980’s.  The audience could also be other baby boomers who have lived through the same era as me and who want to see how their lives compare to mine.  Others might be interested to see the different photographic and other technologies that I’ve used over time to collect these histories.  But if it doesn’t generate an audience, that’s fine by me too as I’ll enjoy writing it just the same.

But I would welcome feedback and comments from whatever big or little audience this website produces.

At my birth in 1950 and move chronologically forward?  No.  I’m going to start this journey by writing about my own history of taking pictures.  That started in 1961 at the age of 11.  I’ll move through the cameras and film I used and the ways I stored the photos I took.

But, since this is a queer memories website, I should eventually get down to business and talk about my coming out and gay life, probably starting by concentrating on my 20s and 30s in the ’70s and ’80s.   After that, who knows?

4 thoughts on “What Am I Doing Here?”